With the launch of the 2019 Formula 1 cars a huge amount of attention was paid to the designs of the new front wings. But there was one small but hugely important detail that featured on a number of these that was almost entirely overlooked. A Texense tyre temperature sensor, a key factor in determining the outcome of world championships.

From the moment that Pirelli was appointed as Formula 1’s sole tyre supplier in 2011, F1 teams have struggled to get the best out of the Italian rubber. At times it has made the difference between finishing on the podium or getting lost in the midfield. As a result of this F1 teams have spent a lot of time trying to get a clearer idea of how the tyres actually work on track, working with sensor manufacturers to create new products to give a better insight into what is really going on during a run. These projects have had mixed results.

‘Teams were mounting tyre temperature sensors on the leading edge of the sidepods or in the mirror housings, but positioned there they suffered from loads of dirt and grit being thrown at them so the lenses were killed pretty quickly, Stephen James, CEO of sensor manufacturer the Texense Renvale Group, says. ‘Also, the distance from those mountings is quite far away from the point of interest. Generally speaking they were 800mm to a metre from the surface of the tyre in either of those locations. This had an impact on accuracy as you had to amplify the signal quite a bit, but that also meant that there was quite a wide spread for the data points. The overall results were okay but from an eight channel tyre temperature sensor you were only seeing three or four spots of data as the others had missed the edge of the tyre. Additionally we found that it wasn’t really possible to run a narrower sensor and get the level of accuracy needed!

‘From an eight-channel tyre temperature sensor you were only seeing three or four spots of data, as the others had missed the edge of the tyre’

Engineers at a number of suppliers worked on solutions to resolve this issue and variety of products hit the market, but the most popular was introduced in 2014. It is a wireless eight channel IR tyre temperature sensor developed by Texense, specifically designed for mounting on the front wing, a position which in many ways is better than the sidepod or mirror housings, but also comes with its own challenges.

Mounting it on the front wing means that it is much closer to the tyre, James says. ‘This gives great accuracy, but having it there really meant it has to be wireless as you don’t really want wire going through the nose when you might have to change it during the race. One or two teams do take wire through to the front wing but it’s quite a complicated system of connectors with locating dows and everything else to make sure you can still change the nose really quickly, we wanted to avoid that complexity!

That style of sensor is still in use with a number of the F1 teams, the tear drop housings visible on the front wings of the new cars, but is now absent from others, with those teams moving toward alternative methods of monitoring tyre temperature.

‘It is difficult at the moment, Renvale CEO Stephen James says. ‘Right now, generally what the teams do is run a thermal camera in Free Practice 1 or 2 on the Friday of the race weekend along with the eight-channel IR tyre temperature sensor. The problem is that the thermal cameras are generally quite bulky, smaller ones are available but broadly speaking the smaller and lighter they are then the less accurate they are. At the moment the Formula 1 teams have to take the thermal imagers off after Free Practice 2, so they don’t have it in FP3 or qualifying. In the race they probably would not use it anyway as the thermal image would be a huge data packet!

According to James, while the thermal imagers do give valuable data, they are not as accurate as they really need to be, hence their use in conjunction with the IR sensors. The ideal scenario is for the teams to be able to have the thermal image but also be able to extract accurate data points from it’ he says. While you can already do this to some extent with the thermal imagers on the market, the teams have fed back to us that while the data is alright, it is not great. Accuracy is really important to the teams now as the operational window of the tyres is very tight, it can be a matter of two or three degrees and it is crazy how much of a knife edge the teams are running on to get the tyres in the window. So the temperature spots are essential, they need those individual data points and they need to be accurate. 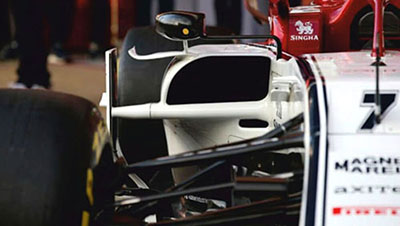 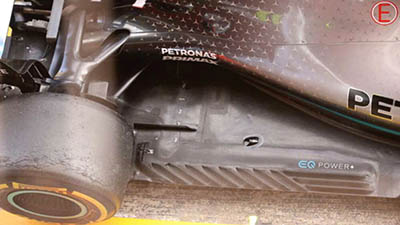 With both the IR tyre temperature sensors and the thermal imagers having their shortcomings, the F1 teams have approached the sensor suppliers to ask them to create something which has the advantages of the thermal imagers with the data spot accuracy of the IR sensors, all of this made as small and light as possible.

‘They told us that the real golden ticket would be a unit which could give you close to the same level of accuracy as the larger thermal imagers but in a small package so that you can run it all the time, James says. ‘That is the next step.

‘We are now working with a thermal imaging supplier that we know nobody else uses, and we are creating that new sensor which will fit in a small housing, which can be retained right through the weekend, and offer both a thermal image and eight or sixteen spots of data, James adds. This will give the teams the advantage of getting that extra data in FP3 and in qualifying, which is likely to be quite useful. The mechanics will like it too as they will no longer have to take it off the racecar at the end of the sessions on a Friday!

Could it be that the F1 teams are basing their simulations and calculations on flawed data?

Formula 1 teams are not only taking temperature measurements on the surface of the tyre, they are also utilising sensors inside the tyre, mounted to the rim and directed at its inner surface. This is another crucial area in developing a clear understanding of how the tyres work and it is an increasing challenge for the sensor manufacturers.

‘It is so difficult as the internal tyre temperature sensor itself is part of the tyre pressure monitoring system (TPMS), and that gets seriously hot as the teams are putting so much energy through the brake drums into the wheels to do bulk heating of the tyres, James said. You already see issues with TPMS units struggling to survive. That is not an issue with the sensors it is just that the teams are putting crazy temperatures through the rims, and it is killing the sensors. There comes a point where the battery technology and electronics cannot cope and right now the units are on the very edge of survivability. You have to consider that it is a location which is spinning around at 300km/h, at 150degC, while being subjected to substantial g-forces. It could not be a lot worse!

The harsh environment inside the tyre is not only a challenge in terms of reliability of the sensors, it is also a major factor in terms of their accuracy. If you have a thermopile which has not been thoroughly calibrated and point it at a black body target, it might show you a reading of 100degC, for instance, James says. ‘But if you then heat the thermopile up you will see the result for the same target start to drift and change. If you heat up the sensor its output changes, even though the target is the same. So with that in mind consider the fact that the temperature of the tyre is constantly varying, as is the temperature of the sensor. If the high temperature was a constant you could compensate for it quite easily, but with these units inside the tyre everything is varying all the time. It is really very difficult; I have no doubt whatsoever that getting good accuracy of the internal sensor mounted on the TPMS unit is a very difficult challenge indeed!

Inside the TPMS unit there is only the IR tyre temperature sensor and the pressure monitoring system, but in some instances it also contains a third tier of sensor.

This point about accuracy also raises question marks about the teams ‘understanding of the way the current Pirelli tyres work. Could it be that they are basing their simulations and calculations on flawed data?

‘The external tyre temperatures we think are pretty accurate, but the harsh environment of the internal sensors does bring into question their accuracy, James says. ‘That all brings into question the accuracy of tyre core temp models being used. It is super important to understand and accurately model the temperature of the core of the tyre, the surface temperature is important as is the liner temperature but it is the temperature of the rubber in the middle which is key. You cannot measure that easily, you could put thermocouples into the tyre but that is not really a race-able solution and it is not an option available to the teams.

While the sensor manufacturers and the teams try to find a way to better understand the core temperature of the tyres the goalposts will move in 2021 when F1 switches to 18in wheels and lower profile tyres. ‘For the external sensors the new wheel and tyre sizes will not make much difference but for those inside it will be a bit of a reset as there is a different gas volume, the distance between the sensor and the liner will be smaller, you also have a not insignificant increase in the inertial forces on the sensor too James says. In fact, the bigger the wheel and the smaller the tyre the bigger the challenge is for measuring the temperatures, as you will need to get a spread of IR points across the tyre but with the liner so much closer that will be a challenge! This development process may seem minor, but if a team or a sensor manufacturer manages to solve the problems then this alone could be a big enough advance to change the result of a future world championship.